A video from our Foundations Live event created by a bricklaying YouTube star has gone viral receiving over 18,000 views.

Stu Crompton, whose Best Bricky videos have attracted over 70,000 followers, was among the hundreds of people attending Bishop Burton College.

Hobson & Porter created the programme to address the skills gap in the industry. This year it featured over 70 exhibitors and 16 schools.

Stu, who attended with his dad, said: “We had a really good time, there was some really good innovation, some cracking products on show and we’ve learnt a lot.”

The video was filmed around the site and featured the likes of Polypipe, BucketBarrow and Rockwool, who were exhibiting, as well as Stu being filmed holding Hobson & Porter’s ceremonial spade.

“It’s also good to meet like-minded people in the industry and get your name out there and help people out.”

Such has been the success of Stu’s YouTube videos that he has started an academy for teaching the art of bricklaying, which ties in with the aim of Foundations in attracting the next generation of construction workers.

He said: “Times are changing and social media is a big part of every business. It is where the youngsters of today go so it is a good place to make an impact with my videos.

“Every day I’m hearing about people who got into bricklaying or want to become a bricklayer after watching my videos, so that’s job done for me.”

Dave Blades is a director at Hobson & Porter. He said: “The video created by Stu Crompton is great and really showcases the amazing organisations and diversity of the construction industry.

“Thousands of construction workers are needed in the coming years and a key part of filling these vacancies is appealing to people at a young age to aspire to work in the industry.

“The videos created by Stu play a vital role in that, as does our Foundations event, which this year was attended by 16 schools and colleges.”

To view the video, visit www.youtube.com/watch?v=4aRvnkxktsU 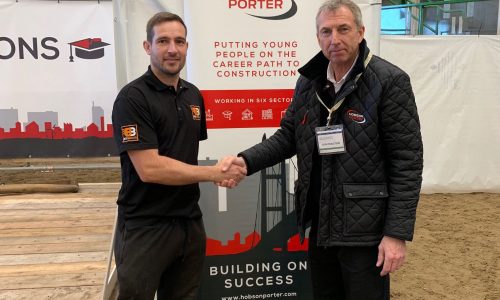