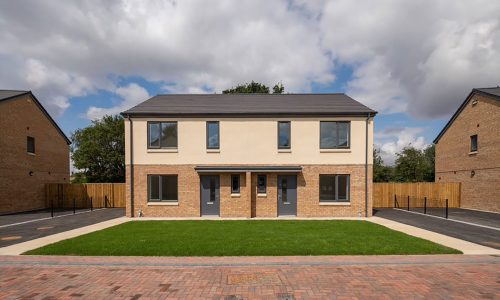 The dwellings at West End Farm were built in five pairs comprising four, two-bed houses and six, three-bed houses, for East Riding Council. The scheme was part-funded by Homes England.

The project, which took 60 weeks, required consultation with external parties on ecological issues, including trees and nesting birds. As well as the housing the project required significant improvements to the access road to take it to adoptable standards.

Dave McCorrie, Hobson & Porter’s site manager, said: “Given the close proximity of residents and the ecological issues, the scheme has been a sensitive build, but one in which I’m pleased with the outcome.

“There was also the challenge in terms of the restrictions of movement, due to the access being along a private road which is used by residents.

“These are much-needed good quality affordable homes. Several families, who otherwise wouldn’t be able to afford a home in South Cave, will now have that opportunity.

“It is also another example of excellent partnership working with East Riding Council on a project which will have a long-lasting impact.”