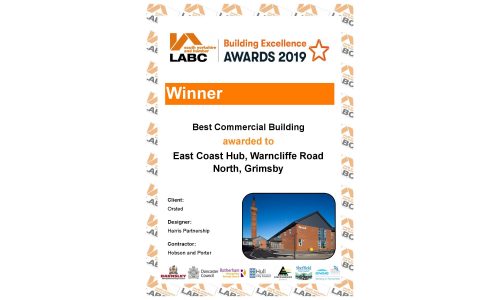 We’re delighted to have been named a winner in LABC’s Best Commercial Building category at this year’s South Yorkshire and Humber Building Excellence Awards.

The award is for the work for Ørsted on the East Coast Hub in Grimsby. The building is the largest centre of its kind in the UK. As the principal contractor, we extended the existing operations’ centre at Grimsby Royal Docks, creating a world-class facility for the operations and maintenance of offshore wind farms.

Hobson & Porter Business Development Director Dave Blades said: “We are delighted to receive this award and to be recognised in this way for the hard work carried out on this important project.

“It is recognition to all of our staff who delivered the project to such a high standard.”

The LABC Building Excellence Awards showcases buildings and design teams that have had to tussle with complex, technical or construction issues and building site constraints.

“After working in association with the team over three phases of the East Coast Hub on Grimsby Docks we recognise that the award is richly deserved. The contractors have worked closely throughout with Building Control to ensure a safe, accessible and healthy environment for the building users is achieved.”

It’s not the first time Hobson & Porter has tasted LABC success. In 2015 the Westermost Rough Operations and Maintenance Building on the Grimsby Royal Dock was named Best Commercial Building at the regional South Yorkshire and Humber awards. The work for DONG Energy (now known as Ørsted), was the first in the world to operate a huge 6 megawatt (MW) offshore wind turbines.

Members of the team picked up the latest award at a ceremony at the Forest Pines Hotel in North Lincolnshire.