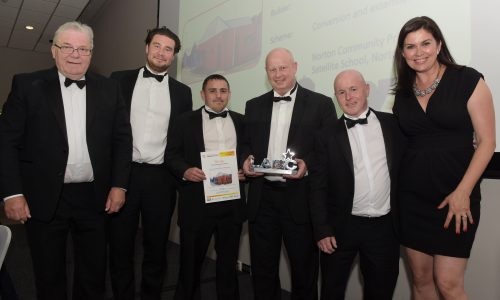 Hobson & Porter is delighted to announce that it was the winner in the ‘Best Educational Building’ category at the recent LABC Building Excellence Awards North and East Yorkshire 2018 on Wednesday 13th June.

The new school building contains six classrooms for pupils in years 5 and 6, along with all the other facilities required for a successful modern school including reception, library, staff room and administration area, IT suite, kitchen and dining area and teaching kitchen, and toilet block.

The project made the headlines during enabling works, when a large number of historic artefacts were unearthed. They support the existence of a Roman fort and a significant development in what is now the northern part of Norton. An archaeological team was on site during much of the construction of the satellite school and the site team had to carefully undertake its work around this.

Hobson & Porter is building a successful record at the LABC (Local Authority Building Control) Building Excellence Awards, having previously been a finalist for Phase 1 of Riseholme Campus, a part of Bishop Burton College. The LABC Building Excellence Awards are the largest business to business awards in the UK and are open to anyone involved in a construction project where building control was provided by a local authority.

The 2018 awards were presented at a black-tie ceremony at the Principal York Hotel in York, which was hosted by TV presenter Nikki Chapman. Our award was collected by Contract Manager Gary Allen and Site Manager Dave McCorie, alongside Nick Brennan from the project’s architects, Align Property Partners. Congratulations to the site team at Norton Community Primary School on this fantastic achievement!