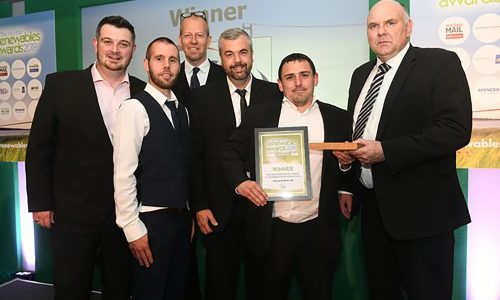 We’re delighted to have been named the winner of the Best Renewable Energy Project or Installation category at the 2019 Humber Renewables Awards.

It is recognition of our team’s excellent work in delivering the multi-million-pound East Coast Hub in Grimsby – the onshore operations and maintenance centre for Ørsted.

The awards highlight the exceptional work being carried out by green companies across both banks of the Humber, with the organisers describing this year’s awards as a highly competitive year to match the Humber’s burgeoning renewables’ industry.

We were also shortlisted for the Medium/Large Business of the Year award, which was picked up by James Fisher Marine Services.

Richard Hunter, managing director for Hobson & Porter, said: “This project has been a real team effort in extending the existing operations’ centre at Grimsby’s Royal Docks, creating a world-class facility for the operations and maintenance of offshore wind farms.

“We’re really pleased with the work we’ve done, which is down to the efforts of everyone involved – from the onsite team, the office staff and the consultants who supported the project.

“We’ve built up a really good partnership with Ørsted with the East Coast Hub another example of a friendship which goes from strength to strength.

“Six or seven years ago we would not have anticipated renewables to have such a big presence in the construction industry with onshore building projects such as this. It is an area which continues to grow, and one we continue to grow in. Our current work on the Aura Innovation Centre marked the eighth project we have undertaken in the offshore energy sector, a remarkable achievement considering as a business we have never stepped foot offshore.

“Congratulations to everyone who won Humber Renewables Awards and for those shortlisted. There were some wonderful examples showing why the Humber has gained an enviable reputation as being the UK’s Energy Estuary, and at the forefront of the country’s zero-carbon ambitions.”