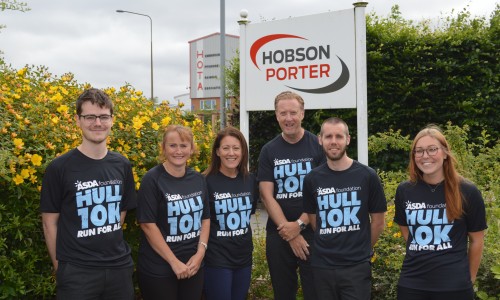 Congratulations to our team of athletes who successfully completed the Hull 10K this year!

A team of ten entered the race, which took place around Hull city centre on Sunday June 18th. Despite the gruelling heat, with temperatures reaching 27 degrees centigrade, the team completed the run with a very respectable time of 46:03 (an average of the first three runners’ times).

Richard Hunter, Managing Director and part of the team, said: “The race was particularly tough this year because of the baking sun. There was no respite at all, but we dug deep and took on plenty of water. I’m pleased to say we all got to the finish line!”

This was Hobson & Porter’s eighth running of the Hull 10K, which has become one of East Yorkshire’s biggest charity road races. It is in support of the Jane Tomlinson Appeal, and all runners were cheered on by a large crowd of spectators along the 6.2-mile route, helping to create a fantastic atmosphere on the day. Well done to everyone who took part in the race.