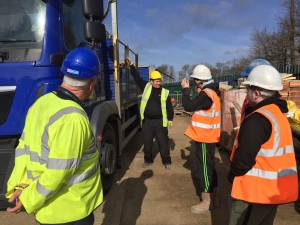 The Hull-headquartered construction firm enjoys a long-standing relationship with the college, having worked on a number of construction projects both at their main site in Bishop Burton and in Lincoln.

Hobson & Porter drew on its supply chain partners to bring about the donation, made by Ibstock, of several tonnes of bricks which were delivered by Jewson. Students were able to oversee the delivery and ask questions of Jewson’s driver.

The donation is just a small part of our drive to help secure the next generation of construction workers, and was welcomed by the college’s construction department.

Another collaboration between Hobson & Porter, Jewson and Bishop Burton College is Foundations Live, which will take place for the third time on 10th October. Hosted by the college in its equine arena, it is the region’s largest co-located construction trade and careers event. 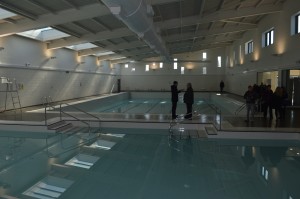 As well as creating an entirely new part of the centre, the existing building has also been refurbished and the roof replaced. The area around the leisure centre has been completely remodelled, with the creation of a large car park.

During the 18 months on site, the construction team, led by Kevin Harrison, has welcomed students from a number of schools and colleges, with St Anne’s Community Special School in Welton, Estcourt Primary Academy and Mersey Primary Academy, both in Hull, producing artwork for the Ivor Goodsite hoarding competition which received the runner’s up prize.

Everyone is now eagerly awaiting the opening of the new centre, which will provide a range of first-class facilities for people of all ages.

Young badminton player Owen Walker has continued his fine run of form since Hobson & Porter began sponsoring him just over a year ago. He trains regularly with the Yorkshire Squad in Beverley, Hull and Leeds and, despite a number of setbacks, he has achieved a great set of results in the following tournaments:

Nottingham U17 Silver….Silver Medal in singles and Bronze Medal in boys doubles

Congratulations, Owen – keep it up! 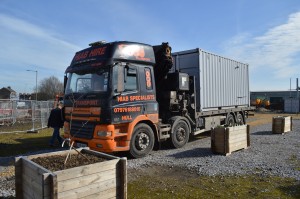 Rooted in Hull is the urban farm project currently in construction at the derelict dry dock in St Peter’s Street, Hull. The idea is to introduce a community space for the growing of fresh fruit and vegetables and the rearing of livestock to help local people learn more about food and nutrition, farming and distribution.

Hobson & Porter helped with the formation of the project and to establish contacts, partnering with national building supplier Jewson to provide materials for the building structures. On Friday 9th March, two of these structures – shipping containers completed by Hull College students – were taken to the Rooted site in St Peter’s Street. The containers had been in place at Hull College for just over a year, where students had panelled the interiors with wood, insulated the walls, installed electrics, painted and decorated and hung doors.

The standard of work the students achieved within the containers has helped them to secure further work to build street furniture for Hull’s newly regenerated city centre. Now in place at Rooted’s base, the containers will be used to help local people escape poverty and grow fruit and vegetables. It marks a successful year on this innovative and inspiring project, which looks forward to many more milestones in the months and years To come.

Hobson & Porter has completed a series of workshops at Bricknell Primary School aimed at educating and inspiring primary school girls to pursue careers in the manufacturing and engineering industries.

On 7th March, Mark Young (Site Engineer) and Pauline Steele (Employment and Skills Coordinator) demonstrated to Year 4 pupils how maths is used in construction and engineering. Pupils then had the opportunity to get to grips with measuring equipment, including metre sticks and a Leica Total Station.

Girls from Bricknell, Appleton, Francis Askew, Paisley and Victoria Dock primary schools, which all form the Constellation Trust, took part in the event. It was part of the Women into Manufacturing and Engineering (WiME) initiative led by Green Port Hull and supported by Siemens Gamesa, Airco, Jobcentre Plus and others to encourage women to choose this career path.

Feedback after the event was overwhelmingly positive, with staff commenting that they would like it to become an annual event. Here are some of the comments from pupils:

‘I’ve loved working with my friends.’

‘I wish we could do more things like this at our school.’ 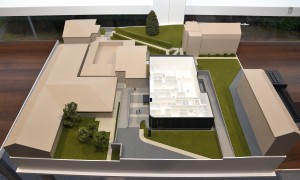 On February 19th, the foundation plaque for the new molecular imaging research centre at Castle Hill Hospital was unveiled by Professor Nick Stafford, chairman of the Daisy Appeal charity and Professor Susan Lea, Vice-Chancellor of the University of Hull.

Hobson & Porter is the main contractor for the construction of the centre, which is a partnership between the Daisy Appeal, the University of Hull and the local NHS, to translate scientific and medical research advances into clinical use. It is being built adjacent to The Jack Brignall PET-CT Scanning Centre, for which Hobson & Porter was also the main building contractor. The building was opened by Virginia Bottomley in 2014.

The new research centre will house a GENtrace 600 cyclotron, which will enable researchers to create the ‘customised radiotracers’ that are needed to detect the early signs of cancer, cardiovascular disease and dementia. Also at the unveiling of the foundation plaque were representatives of GE Healthcare including Mr Trevor Boanas (Trustee), Dr Assem Allam (Trustee), Lars-Olof Arlasjo (GE Healthcare Consultant) and Martin Orbe (GE Healthcare Product Manager Cyclotrons).

The site team is currently undertaking enabling works, diverting services and drainage from the main building to the site of the new building. As 60% of the footprint of the new building lies on the site of a now-demolished building, the existing floor slab will be broken up after the enabling works are completed. This marks the beginning of the construction phase, which is likely to be mid-April.